Let’s go back to the time when your nigga used to trip
‘Bout the time we spent, girl, when we were just friends
It was all friendly on my end
Even though I look forward to seeing you again like, uh
When am I seeing you again?
Ayy, when are we speaking again?
Shit, you look good with that ink on your skin
Hood, but you far from the streets you was in, oh yeah
No he don’t like it, call me up
He don’t like it
This was the perfect timin’
Love you, I’m sorry and I can’t, yeah
Talk about you like a queen making
As if you even never even mattered
And you a bad bitch, you keep getting badder
This ain’t the side nigga anthem
I been straight forward, he’s going backwards

Relax, yo, just chill
I love you, I’m with you
I ain’t with this nigga
You don’t think I..
My best friend, he’s my brother
My brother
I don’t think he’s your brother
That’s your blood?
Aight
Fuck him, that’s what it is
That’s my brother
No, no, daddy can fuck
You fuck him

You was on the verge of losing it
You was acting like you ain’t want shit to do with her
I cut out the bullshit and kept it true with her
That’s why the sexual tension is high when I’m in rooms with her
She really the shit, I don’t be juicing her
I’m the shit too, that’s why I’m in tune with her
I feel like I’m sewn on ya
I feel like you grew on me
Have I grown on you?
Done frontin’ like I don’t want you
Keep treating me like I don’t know you
Back and forth between me and all your niggas
You’re busy tonight, that figures
Tonight you’re staying in his city
And still I answer your call when he doesn’t answer at all
But I want that too, that’s all
I need the same in return, that’s all 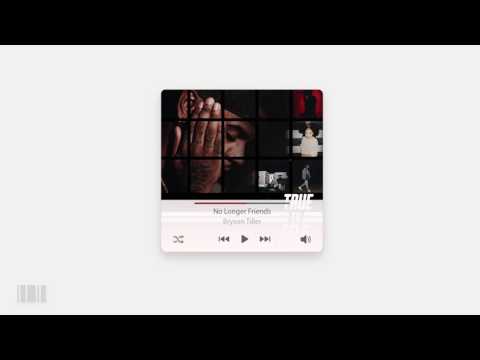 “No Longer Friends” is the second track of Bryson Tiller’s sophomore album True To Self. The song takes us through Bryson’s relationship with a girl, and this relationship is made complicated due to the girl already having a boyfriend. While Bryson and this girl start off as just friends, Bryson details how his emotions towards her developed over time.