You & the Cockroach by Hobo Johnson

Okay picture this
There’s this cold floating rock, right
And at the bottom of this rock there’s an ocean
And at the bottom of the ocean there’s these
Little teeny amoeba, right
And after millions of years
And after millions of years these amoeba
They start turning into fish and swimming around
I don’t know how it works, but it does
So these amoebas, right, these amoeba fish
Start swimming around until one day
One of these fish is like “you know what
I fucking hate the ocean, it sucks, its cold, its wet
I’m done..I’m done”
So he grabs these little things that are called hands and feet
And connects them to his body
And he crawls out of this ocean, right
And when he gets onto the bay he looks around
And he sees…Guess what he sees?
A female fish, and she’s beautiful. Oh my god, stunning
So they talk, they talk for a few days
And they start, you know after a few days of talking
They just start mashing parts, cuz that’s what happens, right
So they mash parts and all these babies get born
After millions of years these babies shed their scales, shed their fins
Until they start standing upright, and one day
They, their fucking brains get bigger, so big
They begin to understand these really scary concepts
And one of these concepts is that they’re going to…die!
And what’s scarier than knowing you’re going to die?
Nothing, to me
So one day this guy’s like
“You know what, I’m gonna create something
That makes me not afraid of dying”, Right
So he comes up with it, and its actually called…
This thing you may know as, its actually called…Religion!
And this religion causes a bunch of…Conflict!
Bang bang bang, that’s literally what it sounds like
So with all this (Conflict!) they understand they need some order
So they create this thing called…Government!
To keep each other in line, but guess what
It actually doesn’t happen like that
Guess what it creates, it creates a bunch more…Conflict!
Oh my god, and out of all this conflict arises a president
And this president is orange, he’s got orange hair
It’s parted to the side, it looks really dumb
He’s chubby, and he’s got little sausage fingers
They look like Little Smokeys
I personally love Little Smokeys
Either way, he starts arguing with this leaded
On the other side of the world
He’s got a bowl cut, he’s similarly pudgy
He’s got sausage fingers too
I don’t know what it is with guys with sausage fingers
But it messes their minds up, right
So they start bickering like little children
And one day the guy with orange hair is just like
“You know what I’m gonna fucking do it, I’ve got
A small dick I ain’t got nothing to lose”
So he gets his thing, and he presses the button and it justgoes

What’s the only thing that survives a nuclear war?
Everyone say it on 5…
1, 2, 3, 4…5 Cockroaches!
So the cockroaches are really small, but
After millions of years they start getting bigger
And they start losing their fucking shale…shells
And losing their fucking antennas
And then they fucking..brains get so big
They begin to understand these really scary concepts
And the concepts that they are going to…Die!
But guess what, they don’t wanna die
So they create this new thing called…Religion!
But it creates a newer thing called…Conflict!
So then they protect each other, so they create…Government!
But then it creates even more…Conflict!
Oh my god, and out of this conflict arises this fucking president
He’s a cockroach, he’s a little small boy
And he gets really fucking insecure
About his place in the world, ha ha ha, classic
So he finds some guy to project onto
And they start bickering, and they bicker and bicker
And the other guy’s like
“Fuck you”
The other guy’s like
“Fuck you, motherfucker”
But he has to go to his top cockroach scientist
Because guess what, nukes don’t fucking work on cockroaches
It bounces off them like…a soft ocean breeze
So the president fucking, he’s like
“Ok I’m gonna do it”
So he devises a new missile
He talks to his top cockroach scientist, imagine that
A big like, human sized cockroach in a lawsuit with glasses on, heh
So he fucking tells him, he’s like
“We need a missile that kills cockroaches”
So the scientist is like
“Ok I got it, it’s gonna be a missile
And on the end of the missile instead of a nuke
It’s one giant, president it’s a giant, it’s a giant…”

SHOE!
AND IT BLOWS HIM UP

It’s a giant…shoe, heh
Classic, classic, classic…I mean
I mean, we just tryna chill
We didn’t come he to show off, or like flaunt our shit
Or anything like that
We just came to chill and have fun
And I guess that’s what life’s all about
Ha ha, let go 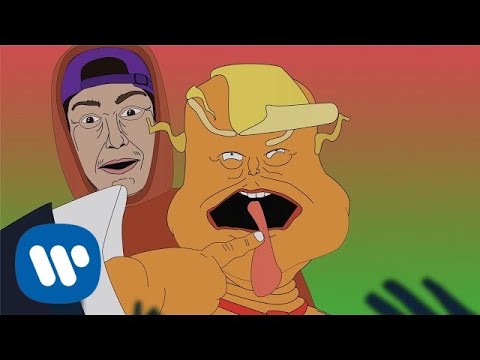