There’s never been a single time
Not a, not a-one, that I’ve ever been to Detroit
Where it wasn’t some kind of adventure
City is fucking crazy, it’s like, it’s palpably alive
It’s an entity, it’s not like just a place you go
It’s Detroit
And one of the reasons that Detroit is my favorite market
Is because the audiences in Detroit, for a comedian
I find them to be particularly challenging
So when I go there, in this particular story
It seemed like a pretty benign night
And I’m sittin’ in the dressing room at the Fillmore
And there’s an older gentleman in there
And I don’t really talk to the guy much, but he was a nice guy
Cool energy, shit like that
And then, famed Detroit rapper Danny Brown came in
Now this time, I wasn’t that familiar with Danny Brown’s music
You know what I mean?
So when he asked me to smoke with him, I just smoked with him
I didn’t hear all that “Adderall! Adderall!” and all that shit
I didn’t know he was about that life (Haha)
I’m assuming it’s weed, I don’t know what the fuck it was
But, boy, I mean, I smoked weed a million times in my life
Never, ever remember feeling this way any before
And as I was walking on stage, I told my road manager
“You know, my number’s up tonight”
He said, “What does that mean?”
I’m going to bomb
And true to my professional prescription, I did
But, there’s bombing in there and there’s shit that happens in Detroit
It’s like, the crowd was with me
But the way the crowd responded to me widely
Was one of my favorite crowd interactions ever
And as the set is going terribly
When it’s clear I’m not gonna be able to pull the nose up and I’m gonna have to crash this thing
I saw Danny Brown slipping out the room, which made me laugh really hard
Go back in dressing room and everyone, you know there’s a stink on ya after you bomb
Where everyone looks at you like, you know what I mean?
Like Headwound Harry, like, “Nigga, are you okay?”
But I really, I can’t explain it to ya, I really didn’t care
And then, and then, it turns out
That this kind older gentleman, is Big Sean’s father
And my goodness what the, the, he gave me a pep talk that only a dad could give
And it made me feel wonderful, man (Wow)
So shoutout to you Big Sean, shout out to Detroit
I’ll never stop loving your city, and I’ll never stop loving you, bro
You guys are the truth, much love to the Motor City 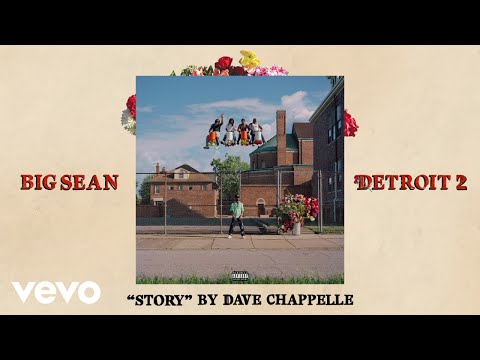