Your uncle’s old saying is still the same:
“If you don’t vote, then you can’t complain”
But you wonder after all these years:
Could one vote put a stop to all the tears?

Tears of frustration, tears of loss
Tears of oppression, tears of the cross
It’s easy to hide on the web
Not so easy when you’re on the other end

This aint no 3D movie, there’s a choice
Imagination fuels the voice
Your vote is your magic wand
Vote for whipped cream clouds, if you want

Vote for rivers and salmon in the streams
Vote for oceans flowing from inside your dreams
Dreams of equality; life is divine
Musical dreams of a sweeter time

Vote for wonderful architecture and better movies
Vote with secret humor, but vote truly
Every word, every gesture, you elect
This system isn’t great, but it’s perfect
DON’T JUST VOTE

“We have to excise a malignant cancer from the body politic. But that’s just the beginning. Real politics is what you do before and after you push the lever. You have to keep your shoulder to the wheel: engagement, activism, organizing – that’s what will make the difference.” – Noam Chomsky 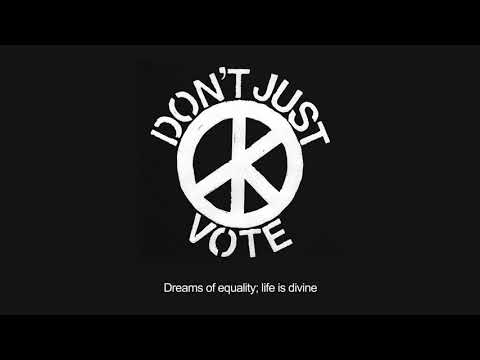