I swing that stick like Wayne Gretzky
I keep a K on me like I’m Coach K, Mike Krzyzewski
Hope you set tripping, then I gotta send shots, get your whole set shot
Quiet on the set bitch, shoot at a nigga, no bank shot
Check the game clock, nigga time is too precious
I shoot at a nigga, no rebound
Shoot the whole team down, rookies and veterans
She give me Facetime, no texting
She give me face through the zipper, bow
Open face, Tunechi got shooters like Golden State
Shoot at a nigga, no dribble, no handle
Shoot at a nigga, no dribble, no travel
Shoot at a nigga, no Euro step
Still have my dribble, ain’t using my pivot yet
Aim at his rim and I hit the net
Shoot at the cheerleaders blood on the pom-poms
Shoot your coach up, shoot the sidelines
Court side seats, get blood on the popcorn
Shoot you like Jordan, like Bronbron
Shoot at a nigga like Harden from the outside
Nigga can’t guard, can’t block mine
Shoot at a nigga, going hard from the foul line
He don’t wanna call, it’s a hotline
Shoot at a nigga, no double dribble
Shoot at a nigga no crossover
Drive way looking like a toy store
I’ma ball I never turn the ball over
Ima shoot on a nigga on mula
Pull up with two hundred guns, it’s a shootout
Shoot at a nigga, no hooping, no hupla
Tunechi, lil nigga, no ceilings, no rooftop
I’m bout to spray that nigga, no drizzle
Get down and lay down lil nigga, no pillow
I light up a J on a nigga, no Leno
I’m slime everyday on a nigga, no schedule
All these lame niggas claiming they killas
Just holding up guns, taking pictures in the mirror
Pop me a seal, I pour a line and reseal it
Then I laugh at these niggas, don’t they look like my children
Giggle, giggle giggle
She lick it right after I bust that shit tickle
She swallow a shot glass of nut like tequila
She like to talk when she fuck, I couldn’t hear her
She like to walk on my rug, it’s chinchilla
She wan’ fuck on my rug, I say “bitch that’s chinchilla”
She like to masturbate while on her period
Then suck on her finger, I swear she the weirdest
My trigger finger, that’s all with my blood
Used to party with bloods, now Hollywood drugs
Got bitches on drugs in the car waiting for us
Waiting on there to fuck then all day we fucking
And all night we bucking, all white the cups in it
Cocaine is soft, all white deluxe
And his head might come off and you might see his guts
And it might make you barf and the memory blush
Run it, run it
I can’t keep up ’cause it might be on blow
And the memory rush, yeah, I might be on slow
‘Cause I might be on codeine and promethazine
[?], I need ice in my punchy
Put ice on my nuts, that be icy as fuck
I’ll be icy icy, very pricey
I be so [?] they call me Chris Lighty
You could get lit up just for some enlightment
Fuck the indictments
I fuck the crystal and I fuck the diamond
I fuck some swimmers and I fuck some divers
Never been fishing, but I fuck the Pricers
I fuck the simple and I fuck the silent
I fuck the Jenner when I fuck the Kylie
I fuck the physical, I fuck the [?]
And I fuck the mental and I fuck the body

Ayo, check this out, this is DJ Khaled
And I want to give a big shoutout to Lil Wayne, No Ceilings 3
But I want the people to know, part 2 is coming soon
Lil Wayne the greatest, Young Money, pot on your head 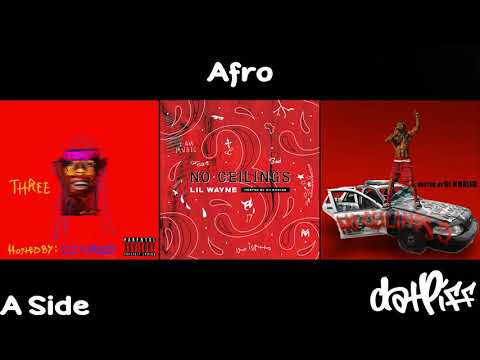