Here we go, it’s George Carlin. I’m a mad dog snarling
I was born in the Bronx and brought up in Harlem
I’m dope at spitting bars and getting crowds hardy harr-ing!
While you’re the least threatening black dude since Carlton!
Now, there’s seven words you can’t say on a TV set
Well, this is the pissin’ fuckin’ cuntin’ Internet
And my cocksucking motherfucking bits are the tits!
Non-stopping brain droppings like my wit’s got the shits!
So call this Pryor-hea: I doo-doo on you constantly!
No pauses in my punchlines, no commas in my comedy!
You’ll be down for the count when this counter-culture counter man
Serves you with a stand-uppercut you can’t counter, damn!
I’m wilder than Gene when I’m killing the beat!
You’re steady taking second place, that’s a Silver Streak!

Any rap battles with you, I be winning ’em!
Your style’s like two drinks: it’s the minimum!
(Ooh!) It’s your boy from Peoria, Illinois!
One hand on my mic, one hand on my groin
‘Cause ain’t no set tighter in this whole damn game
Even the shit that I spit off the top: flames! (Stand up!)
My delivery is rupturing the tummies!
You tell a joke and people go, “Hmm, that’s funny.”
My Mama was a prostitute and Grandma ran the brothel!
Seen some shit but not as awful as your haircut debacle!
I’m the original brother (Hey!) to give the scene some color! (Hey!)
The most iconic stand-up comic! Stand down, motherfucker!

Oh, shut up, you stupid son of a bitch, you know you blew it!
I’d have attacked you two first but your hearts beat me to it! (Oh!)
Cosby, you can’t be here! (Ah!) You’re making people nervous (Ah!)
So let me end you real quick like I was Hannibal Buress (Ohh!)
It turns out you were just like your sweater: monstrous!
The men that I slept with only wish they were unconscious
My sex jokes offend, you’re on the sex offender registry!
Oh, who are you wearing now? Is that State Penitentiary?
Enough with the roofies, let me move on to Rufus
My jokes always had bite, you started out toothless
And you just kept talking, you wouldn’t shut up
Honestly, I’m glad you died. 14 specials was enough!
And Richard, can we talk? Can I call you Dick?
Like your fifth wife did when you remarried your sixth?
At this point, I’ve got more plastic than flesh
But my Tupperware body couldn’t keep your raps fresh!
(I think my pudding-)
So don’t throw down with Rivers! The flow is too relentless!
I haven’t thrashed celebrities this bad since The Apprentice!
I’m closing this battle! No one else compares!
The only place I’m in the middle is on Hollywood Squares!

Good morning, movie bombs! Nice shoulder pads, chief!
I’m a genie in a bottle for some comic relief!
O Carlin, my Carlin, what can I say about you?
Except I don’t think you’ve had a good shit since 1962!
Mork aged backwards and Joan, you must too!
80 years old but that nose looks brand new! Nanu!
Yo Pryor, I Doubtfire makes a good shampoo
Left you running down the street like “Oh, no!”
Comedy ain’t easy, I’ve played plenty of dumps
And believe me, we’ve all hit plenty of bumps (Yeah!)
But now I’ve got the Flubber flows that’ll get the club jumping!
You got second-hand raps. “Found ’em Goodwill Hunting!”
Got more hair on my arms than a Monchhichi!
And I’ll finish this battle like it’s Jumanji!
I love the prince, but you’ll never have a friend like me!
Thanks folks, that’s my time! Gotta set myself free!

WHO WON?
WHO’S NEXT?
YOU DECIDE!
EPIC *Laughter* RAP BATTLES OF HISTORY! 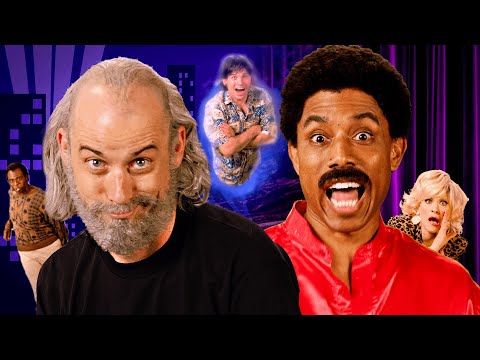