Guevara the terror, fresh Kangol wearer
Ill rhyme slayer from the 60’s era
Revolting heavy metal rebel blood spiller
Me and my guerrillas are a squad of killers (Hoo!)
I’m known worldwide for my steely-eyed look
You’re famous cause of Alan Moore’s third best book
All the children say we will be like Che
Asthmatic, but I’ll take your breath away *gasp*
You tried to rebel against James the first
Here’s a tip for your next plot, try to rehearse!
I got my face on a magnet on your roommate’s fridge
Your head is on a spike up on London Bridge!
You had one job cabron, to strike a matchstick
Got caught with a fuse like your bars, not lit
You should have stayed anonymous, Epic Fail Guy
Treat this battle like the gallows and take another dive

As a communist it must really hurt
That your face has been cheapened, weakened, besmirched
Being plastered on posters, coasters, and shirts
Making capitalists rich off of you on merch
Right, I’m a pious man and I fight for the lord
I would cut you but I don’t want your sweat on my sword
I was tortured until I could hardly sign my name
And listening to you felt pretty much the same (oooh!)
Face it, Ernesto, you’re Castro but less so
He’s Cuba Commander, you’re more of the Destro
Revolt all you want, I don’t give two Guy Fawkes
But look at Venezuela; what you’re fighting for sucks

Don’t try to boast ’bout your banknotes with Guido
You muddled your economy like mint in a mojito
This very battle disproves your communist initiative
These rhyme skills are not evenly distributed (aah!)
I’m Catholic, I’ve got mass when I’m rapping
You’re an ump-Che, that’s Bay of Pigs latin
After what just happened you should retire
Is it the 5th of November? Cause I’m on fire!

WHO WON?
WHO’S NEXT?
YOU DECIDE!
EPIC RAP BATTLES OF HISTORY! 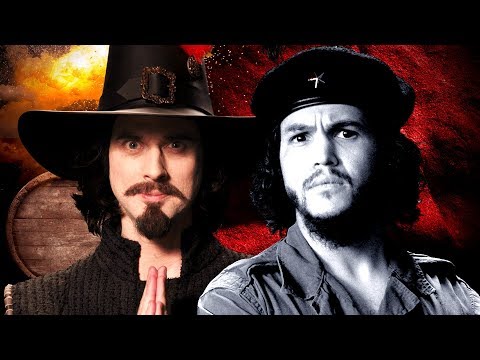