Jacques Cousteau, here to spit flow
Invented SCUBA, captained the Calypso
Palme d’Or winning documenter of the ocean
Ready to battle a desperate, sweaty showman
You’re chunky and soft, you get on my nerves
You’re the only manatee I don’t want to conserve
My Life Aquatic was adventure and beauty
I’m so cool, Bill Murray played me in the movie
I have Oscars! You’re in Doctor Dolittle 2
So run back home to your daddy’s zoo
And just to be clear, ’cause I’m no veterinarian:
Were you killed by a fish kids pet at the aquarium?

Holy smokes, what a place to go!
You’d need a submarine for a blow that low (Awhh!)
You’d better run! You’d better take cover!
‘Cause crikey, I’m going from croc to Jacques hunter!
Have a look at this salty fella:
His face looks like it’s made of pure leather!
Look out! He’s got the body of a naked mole rat
He’s cranky ’cause he has to wear a Papa Smurf hat
I’m a wild man, you’re a subdued sub dude
The only crocs you could handle are some slip-on shoes
Crikey! You’re such a boring guy
You could make a whole show about the ocean dry
But with the sheilas you sure had fun
Your mistress was as young as your first-born son
You never shoulda stepped to the wildlife defender
Now embrace your French nature and quietly surrender

Talk about sons, better watch what you say now
You almost turned yours into Outback Mistake House!

Would you rather talk about your brother? Ooh boy
Nazi! Nazi! Nazi! Oy yoy yoy!

Enough of your antics and madness!
Contain yourself, like my underwater breathing apparatus
You’re a joke of a bloke in a tacky khaki romper
Go grope a nope rope, Crocodile Humper
There’s a type of snail, recently discovered
And named after you – I’ll eat them with butter!
Hey Skippy The Bush-League Kangaroo
Hold the dee, I’m Crocodile Dun with you!

Where ya goin’, fella? Hang on a minute
Like a Joey in a pouch, this ain’t quite finished
Take a look how destructive your old films are
Silent World? More like Silent Worldstar!
If you wanna count fish, please take the reef tour
Don’t go throwin’ C-4 on the seafloor
I’m the gold medal rhymer on the podium
Cleanin’ you up like a Jacques Custodian (Wooo!)
I’m Mother Nature’s greatest conservationist
When I rock the mic, I’m danger! Danger! Dangerous!
So go back down under with your crew
I just blew through you like a didgeridoo

WHO WON?
WHO’S NEXT?
YOU DECIDE!
EEEEEEEEEEEEPIC RAP BATTLES OF HISTORY! 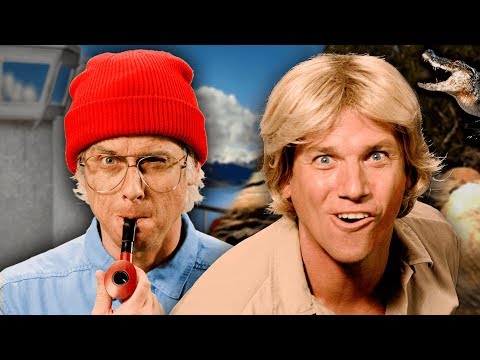