Mother Teresa, for short, call me “M.T.”
I’m a missionary of charity M.C
Three stripes like Adidas, and I’m doing it for Jesus
A one woman nun-DMC
I got a peace prize, but I’m not friendly
You’re oh-for-thirteen as a nominee
I’ve got lines like the DMV
And being me takes balls, but I ain’t got no D envy!
Who could ask for a better adversary on the mic
Than the father of psychoanalysis? Psych!
Look at that egghead! Mama wants some omelettes
I’m here to crack the mind behind the mom-sex complex
I gave food, bed, medicine, and showers
To those whose flesh leprosy had devoured
Your legacy is people who are mad at their parents
Complaining on the couch for two hundred bucks an hour!

Jokes I could make about your looks: abundant
Your chastity vow: redundant
But that’s enough about Mary B
Let’s turn to my favorite subject: me!
I got mouth cancer, wasn’t feeling so hot
Had the doc put me down with a morphine shot
Thank imaginary God I wasn’t in one of your beds
You’d have just sprinkled magic water on my forehead!
I help people live, you watch people die
To get souls for a man in the sky!
You took credit that you didn’t deserve
You’re the fakest Sister Act since Whoopi Goldberg!
You were running Project Pimp the Projects
To you, Calcutta meant Cal-cutta a check!
I can see right through you and you’ve got no flavor
I’m battling a communion wafer!

You call that a verse? You’re super-ego-trippin’
I gotta say, Sigmund, you’re Freudian slippin’!
I built mad missions in my savior’s name
All you built was a mad tolerance for cocaine!
Obsessed with masturbation, but you’re off the beat
Your flows are so poor I should be washing their feet
Dreams are the only place you’ll ever be as dope as me
I make my rhymes count like beads on a rosary!
Everything is sex to you! After I’m done wrecking you
I’ll have to go and do confession just for standing next to you
You want a second coming? I’ll bless the mic again
I’ll end you like a prayer, motherlover! Amen!

I notice that you talk a lot about yourself, which is funny
Since you hide your true feelings like they were other people’s money
Ooh! An exception to my theory! I can’t believe this!
Here we have a Mother that no one wants to sleep with!
You had a nice message, but your methods were detestable
I’ve seen better care given to organic vegetables!
All these tokens and smoke and miracles
You really believe all this stuff? You’re hysterical!
I’ve got the libido to continue to beat ya
But our time is up, Teresa

WHO WON?
WHO’S NEXT?
YOU DECIDE!
EPIC raAAAapPPPp BATTLES OF HISTORY! 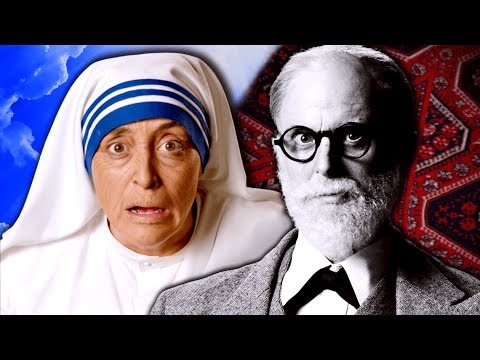