Welcome to BK! How can I serve ya today?
One flame broiled ass clown? Have it your way!
You can’t do fast food half as good as I do
Your pink slime meat turns my asshole to a drive-thru!
You’re played out like a Chuck-E-Cheese Token
Your style’s like your ice cream machines: broken
I’m dropping Whoppers that’ll knock you off the menu!
Call you Ronald Donald, cause there’s no MC in you

Why don’t you call me Ronald Jeremy? ‘Cause I’m getting nasty
Like the whoppers you sell made of horse lips and ass meat
Ask Rick and Morty who’s the lyrical boss
I’ve got lines for days, call me Szechuan Sauce
The undisputed G.O.A.T of putting burgers in bellies
I’m fast food Eminem, you’re Machine Gun Kelly
I’m Coke to your Pepsi, I’m Mac, you’re Android
Let’s be real, I’m Nice Peter and you’re EpicLLOYD

(Alright…)
You’re number one like the whizz I took in your ball pit
Them rhymes you just spit are a Ray Kroc of shit!
You spooky ass clown, you’re so creepy its insane!
You look like you just ate someone’s brother in a storm drain!
You can’t beat the king with your crew, please!
The whole head of your government’s name is Mayor McCheese!
I ain’t loving shit, even if Timberlake sings
I’m running circles round you like my onion rings!

(Your onion rings are pretty good)
But that verse was lifeless! You had no joy in it
Last rapper this plastic had a Happy Meal toy in it
I’m serving billions and I can’t be beat
You’re a bin full of lettuce, facing da feet
Using Cheetos, dude? Get your recipes together, man
I’ve had the same fries since I was Willard Scott the Weather Man
I’m the best trash talking mascot in town
You might be the king, but a clown wears the crown!

(Where’s the Beef? Right here!
Where’s the Beef? Right here!
Where’s the Beef? Right here!)
Show me two losers old enough to be my daddies
And I’ll square off with ’em like the corners of my meat patties
It’s Wendy! The hip-hopping Pippi Longstocking
No flows as Frosty as the salad bars that I’m dropping
I’m topping you two like plain baked potatoes
Exploiting you both like you were growing my tomatoes
King, you’re creepy and you’re always second fiddle
Your breakfast croissants are even worse than his McGriddle!
And McDonald’s gave your job to a box with a face
Left you behind like a quiet kid in a PlayPlace
I’m the fast food Queen, mean with a tweet sesh
Leave opponents frozen ’cause I always keep my beef fresh! 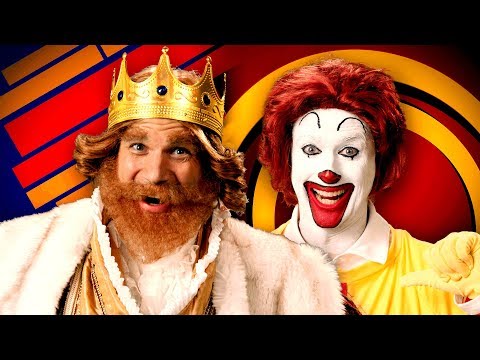