Imagine forests of corpses dripping on a buffet
You call that a nightmare? I call that a Tuesday
Vlad Dracula, spawn of the devil
Dipping my bread in your weeping blood vessels
Scorched the earth from Hungary to Wallachia
I inspire fear, you inspire Count Chocula
Step to the Turks and the bodies started dropping
Put my foot on Ottomans like I was furniture shopping
I save my stakes, no need crucifix
I kill you with Olive Garden garlic breadsticks
I butcher men, women, and children like cows
Put more meat on swords than Fogo de Chao

Does this mic still work after that blah, blah, blah?
Check one… two… ah, ah, ah!
The flex of a rear-spearing princeling can’t vex me
‘Cause I nibble necks and I make it look sexy
I’m Universally known for intrigue and desire
I shapeshift into mist and bone Winona Ryder
Slick hair, popped collar, and a damn nice cape
While you’ve got less taste than an Anne Rice cake
Your rhymes are empty, like I leave vascular systems
I’d grant you the privilege of being Dracula’s victim
But the thought of biting you makes me get nauseous
You don’t look like the type that’s keen on neck washes

Did you shapeshift those punchlines? ‘Cause they mist
Your skill’s like your reflection: it doesn’t exist
Turn your taint to a ’tis, when I put a stick through ya
Haven’t seen a sucker this soft, since Bunnicula
Get beat by Count Dracula? You’re smoking crackula
I dunk on your wackula raps like I’m Shaqula (Oh!)
I’m Vlad to the bone, Vlad the hat-nailer
Vlad that commits heinous acts on rats, ask the jailer
You leeched my name, you pale son of a bitch
And your weak ass gets beat by the sun at the beach
Your slick hair and cape are all flappy razzle-dazzle
But at end of day you’re a bat, and that’s only half a battle

Wow! I did not know that you could read
That’s great… now let’s see if you can bleed! (Hiss!)
Ha! You thought the sun could kill me? Not true!
I’m the vampire so cold they call me Nosfer-achoo
My syllable delivery is devilishly intricate
I rock the house, once I’m invited into it
And here’s a tidbit, that you can stick a stake up:
You’re losing so bad, you should join Team Jacob
Renfield!

Yes, master?
Call a doctor, not Seward (ugh!)
Cause Vlad the Impaler has just been skewered 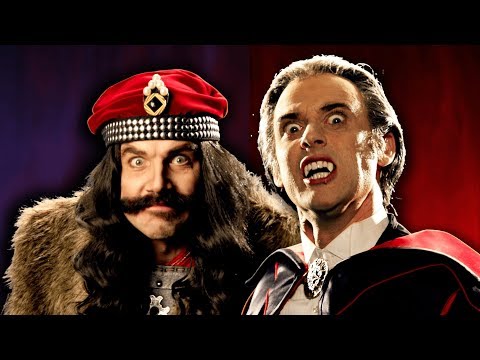