I’m from Tim block, we don’t dick ride, took a few L’s, we can’t let shit slide
Glock gon’ work, don’t care about his side, I ain’t just losin’ my top, I been fried
In the trap spot, where your bitch hide, finally caught one opp, he should’ve been died
I’m from one block, I don’t switch sides, to survive, I could give you a quick guide
Better duck when this four-fifth rock, he ain’t with us see the bitch in his eyes
Just us on the forefront, run on big guys, run up on us, I don’t think that shit wise
I’m the one that went platinum three times in the trenches, that’s why I’m the top in the ‘Raq
Early mornings, yeah, I had to grind to go get it, was checkin’ the profit from crack
I’m surrounded by shooters and killers, everytime that I hop in the ‘Lac
Since a youngin’ knew I was that nigga, that ain’t him so it’s prolly an act
Wooski will make shit scary, just one deep
We put the belt on your shit like your auntie
You think I’m cappin’, well, lil’ nigga, come see
They undercover like 21 Jump Street
I’m recording the bros, they noddin’ off lean, they gon’ try to play like they want sleep
I took off in a race like Lightning McQueen, still let off the K, let my gun speak
Who the fuck want smoke with us? Go to war, blicks loadin’ up
And my lil’ niggas trained to kill, so their hearts been cold as fuck
They been goin’ through pain for real, catch a opp’, they know wassup
We’ll leave his lil’ ass by his trainin’ wheels, tryna hop in this shit, you ain’t old enough (Ha-ha, ha-ha, uh)

Big brother, you tweakin’ on this bitch (Uh)
But you know how we do it though
I’ma go and get they ass one time
Come here, where you going?
Bitch
Uh, uh

Park the V, bounce out, the first nigga I catch I’ma make him a pack (Where you going?)
Old dude ‘posed to be y’all breadwinner, how you let his dumbass get whacked? (Like what?)
Wooski on X in the back of the ‘Lac (No bap), Roc tryna ride and he screaming it’s that (Where you going?)
Reach for a diamond, Trench gon’ up it and then bust it, then get a fuck nigga right back (Grrah)
Walking shit down, my favorite sport (Like what?), fuck the opps, show no remorse (No bap)
Die 5, we cracking the forks, if lil’ nigga playing, we lightin’ a torch (Where you going?)
We wet shit up like drench it, uh, turmoil out of that blitz (No bap)
I’m steady hoping he die with his wit’ his lil’ mans, spin back and
Grind em a witch
Lil’ Trench known for walkin’ shit down (Like what?)
We wet ’em up and then watch ’em drown (No bap)
Brand new choppa, I’m loving the sound (Like what?), hunnid round drum, unlimited rounds (Where you going?)
He felt the switch and went turnin to God, his soul was lost, and now that shit found (No bap)
Told Ms. Nancy, I’m sorry for waking the neighbors but this damn Drac’ too loud (Like what? Like what?)

Nigga, all my bags heavy, I’m gettin’ money
Come try to roll up on us while I’m holdin’ this mag, steady you must be a dummy
Got like a hundred on us, all my guys ready, wrap shit like a mummy
I don’t be givin’ no fuck, I heard he died, I’m petty, I think that it’s funny, uh
This real life, I ain’t cappin’ on Pro Tools
Renegade, we don’t fuck with them old dudes
Man these niggas be movin’ like hoes
MAC or the Glock, I’ll let my lil’ bro choose
I was pushin’ the pack by my old school
Had the shit for the low, like Whole Foods
In this shit I could prolly be gone soon
Mine or yours in the street, them cold rules 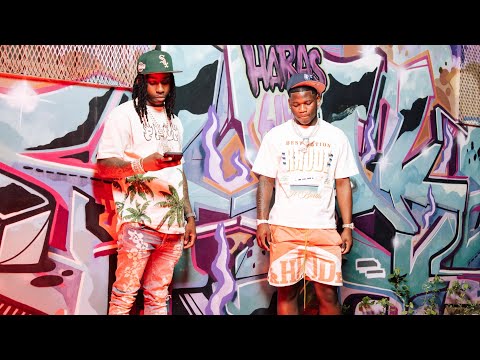