Yo, Mike D
Yo, what up Ad-Rock
Remember that time in ’85 when we were in our van, we driving through Cleveland and…
Oh, oh you in that weird rash all over your body
NO! I mean yes, but no
I’m talking about when Rick gave us the demo tape of Public Enemy
Yo, we played that shit back and forth like about a million times
That shit was nice
So nice, you know I’ve been thinking we should call Chuck D on the phone right now and ask him
What goes on ?

I’m all in put it up on the board
Another rapper shot down from the mouth that roared
1, 2, 3 double for the count
To result of my lyrics oh yes no doubt
Cold rock rap, forty-niner supreme
It’s what I choose and I use I never lose to a team
I can go solo like a Tyson bolo
Make a fly girl wanna have my photo
Run in their room hang it on the wall
In remembrance that I rocked them all
Suckers, ducks, ho-hum, MC’s
You can’t rock the kid, so go cut the cheese
Take this application of rhymes like these
My rap’s red hot, hundred ten degrees
So don’t start bassin’, I’ll start pushing
Bets on that you’ll be disgracin’
You and your mind for a beat in a rhyme
A time for crime that I can’t find
I show you my gun, my Uzi weighs a ton
Word to Public Enemy number won

From the tippy tippy top
Never taking a L
Nobody rock so hot so well
Like the rugged D, the man you see
Rock it to the rhythm of the sure shot beat
Say one for the treble, two for the bass
Rhyme for the mind, shine on your face
Three for the reign, and four for the two
Five cuz I’m live straight from the crew
Six for my game nah I ain’t gon’ stop this
Got my whole swag from two fifth and Hollis
Run got the wisdom, D got the knowledge
Straight from the dome, air tight and polished
Seven to the eight and nine times I say
Run go be great top ten today
Eleven emcees they all try to flex
When Run grab the mic and took flying stick

Terminator X
Before we get started
Now here’s a little story we got to tell
And they sound so def, you know so well
It started way back in history
With the Beastie Boys, LL Cool J
Run-DMC and Public Enemy

Rick was a label with two turntables
And a mic mc’s do what you like
’83 being in the place to be
’84 rhyming to open doors
Def to the Jam and know who I am
Stand to the job and I crack the force
I got a posse of force that back me up
Watch out we got rhythm to match
Ambush attack on my team double team you get creamed
You got it so you don’t catch
Wanna hear it again
We got a force, Def Jam down
The OG circuit sound, Public Enemy
LL Cool J, Beastie Boys, Flav, Run-DMC check out the protection
Rock The Bells in the section
Kicking like Bruce Lee’s Chinese Connection
All stereo never ever mono
All wax just I’m talking about vinyl
The world said freeze we unfrozen
They got me public enemy number won

We gonna let you hear a little bit of that later
Some of that Public Enemy, you stay tuned for that 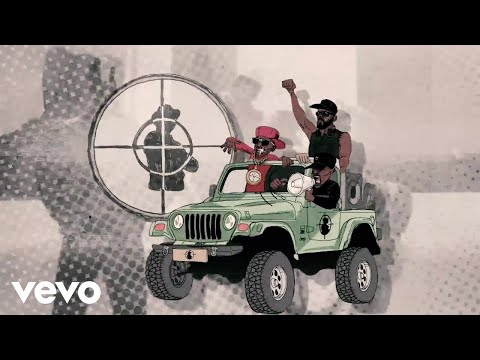